Data released today by the Canadian Institute for Health Information (CIHI) revealed a drastic, 25% improvement in the total time spent in Winnipeg emergency departments for patients admitted to hospital. Winnipeg is now better than the Canadian average in this regard.

The data released by CIHI includes the period from April 1, 2017, to March 31, 2018. During that period, the total length-of-stay in an ED for patients requiring admission to hospital improved 25% across the Winnipeg Regional Health Authority (WRHA), from 43.5 hours in 2016-17, to 32.6 hours in 2017-18, which is better than the Canadian average of 33.1 hours. The ED length-of-stay metric represents the time it takes between a person initially presenting at an emergency or urgent care department, and the time that individual moves to a hospital in-patient unit. CIHI reports this as a 90th percentile, meaning nine out of 10 patients experienced a shorter length of stay.

Data compiled by the WRHA show an additional improvement of 12% in ED length-of-stay from April 2018 to October 2018, building on last year’s progress and bringing Winnipeg even further beyond the Canadian average. 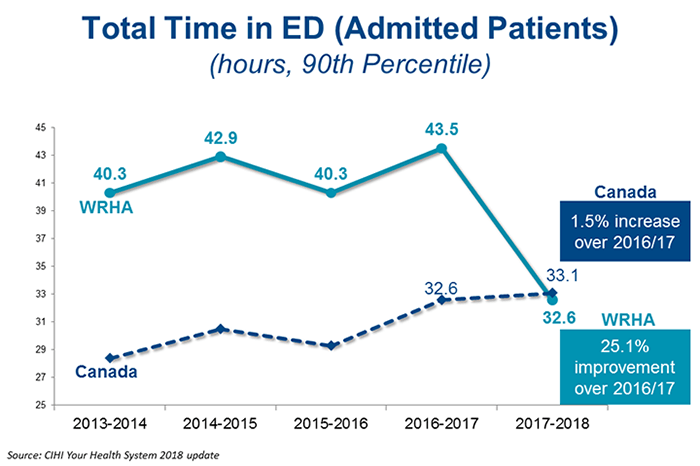 “All WRHA staff and physicians have shown a total commitment to providing better health care, sooner, for our patients, and that’s what has made these improvements possible,” said Réal Cloutier, President and CEO of the WRHA. “As administrators we are encouraged by this progress, but ultimately it’s patients who benefit most from improvements in our system, so we are grateful to our staff for their dedication to achieving the advances that have been highlighted in the CIHI report.”

The CIHI data released today also show a marked improvement in Winnipeg for another emergency department metric. The ED wait time for initial physician assessment (90th percentile) also improved dramatically for WRHA from 2016-17 to 2017-18. System-wide, there was a 13.7% improvement, from 5.1 hours to 4.4 hours. The Canadian average actually grew during this same time period, from 3.1 hours to 3.2 hours, while WRHA showed improvement contrary to this national trend. Of particular note is that every one of our Adult EDs improved their wait times during the reporting period. This metric – also reported as a 90th percentile – measures the wait time from a person initially presenting at an emergency department until being assessed by a physician during that ED visit.

“We know Manitobans – and all Canadians – want to be able to access quality emergency services as quickly as possible. The Winnipeg Regional Health Authority has made great progress around reducing emergency department wait times,” said Greg Webster, CIHI’s Director of Acute and Ambulatory Care Information Services. “This is a good example of an organization using CIHI data to make decisions that benefit patients. To make this possible, at CIHI, we do our best to ensure that data is available in a timely way and that local decision-makers and health leaders have easy access to it.”

CIHI’s data release provided updated figures for 24 metrics related to health-care systems across Canada. The WRHA achieved improvement in 10 of these indicators during the reporting period, while CIHI reported the region’s performance declining on two. A further 12 indicators were reported as stable or “no change,” for the WRHA.

Through its Healing Our Health System plan, the WRHA has made efforts to reduce wait times by improving patient flow across the system, including options for convalescent care; expanding the role and function of Central Bed Access; opening a mid-to-low acuity treatment space at HSC ahead of schedule; and standardizing the patient flow tools used by hospitals across the region such as daily action rounds and patient discharge protocols. Much of the preparatory work undertaken in advance of the emergency department changes last October focused on shortening the length of inpatient stays in hospitals (LOS), which in turn reduces the wait for ED patients being admitted to hospital.

“We are in the midst of the biggest change in our health-care system in 30 years, but we are already seeing better outcomes, and all while sustaining our budgets,” said Lori Lamont, the WRHA’s chief operating officer. “There is still more work to do, but these early results provide encouragement that the Healing our Health System plan will continue to improve health care for all Manitobans.”